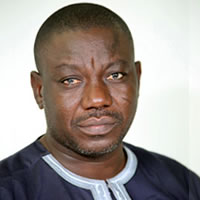 We of the ‘Stop the Maangamizi: We Charge Genocide/Ecocide!’ Campaign (SMWeCGEC), acting upon the initiative and prompting of the All-Afrikan Networking Community Link for International Development (AANCLID) and those working together with it in the Global Preparatory Committee for the All-Afrikan People’s Consultative Congress on Debt and Development (GPC-AAPCCODD), deem it necessary to add our voices of support, encouragement and dynamic push forward to our Afrikan Compatriot Isaac Adongo, the brilliantly outspoken Pro-Good Governance Bolgatanga Central Member of Parliament in Ghana today.

We stand together with all progressive forces in and beyond Ghana in resolving to stand unshakeably by Isaac Adongo against all reactionary detractors scheming to shove him off course in his highly impressive endeavours of genuinely patriotic defence of our Afrikan human, people’s and Mother Earth rights by championing in particular the fight for Economic and Social Justice as vital to advancing Afrika towards the real participatory democratic achievement of total emancipation.

As a Pan-Afrikan Reparatory Justice force campaigning against manifestations of the Maangamizi such as Debt Bondage, we of the SMWeCGEC urge that the sinister attempts to misuse the pernicious Debt Trap into which most innocent peoples all over the World are being enticed, humiliated and even enslaved by unscrupulously greedy banks and other criminally voracious financial corporate vampires and state agencies such as the notorious Bretton Woods institutions of Euro-Amerikkkan Imperialism to discredit, harass and deter genuine patriotic champions of Afrikan progress like Isaac Adongo must be thoroughly exposed, fiercely resisted and vigilantly counteracted without any fear or compromise whatsoever. For, only by so bravely doing can we effectively develop the kind of true Participatory Democracy that will enable us to properly educate, mobilise and rally the overwhelming masses of our Afrikan people at home and abroad to unify in stopping the Maangamizi by our own grassroots-driven People’s Power and secure the total emancipation that will deliver to us the Maatubuntuman vision of true Pan-Afrikan Reparations for Global Justice envisaged by the heroic likes of the Founder of modern Ghana Osagyefo Kwame Nkrumah!

Forward ever onward in Resistance against Debt Bondage to our Pan-Afrikan Rendezvous of Global Justice Victory!