Letter written from SMWeCGEC to Theresa May, UK Prime Minister 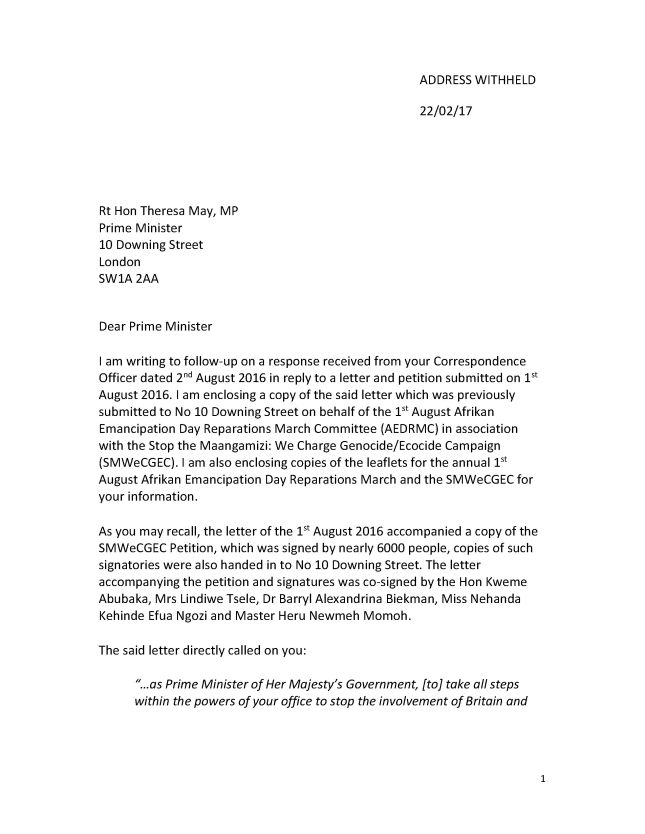 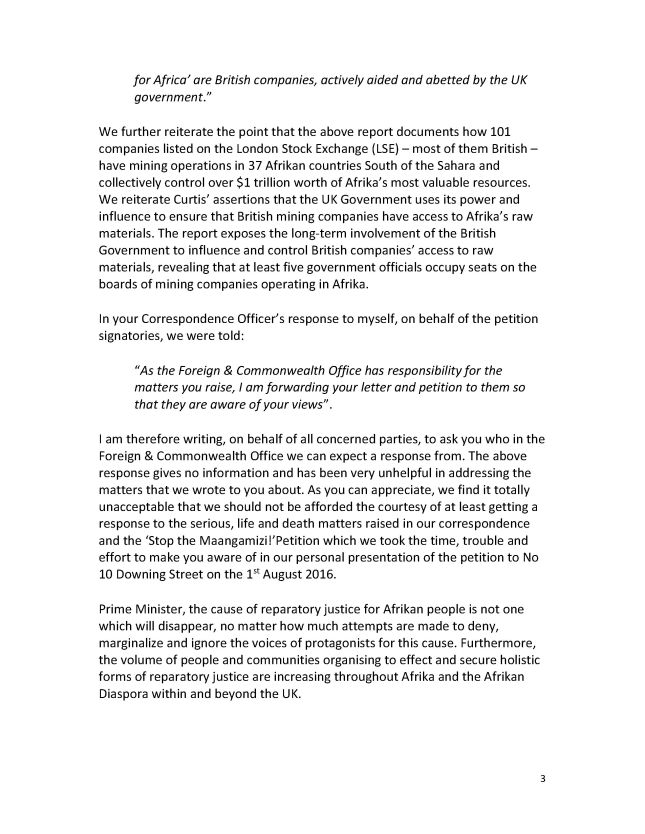 Response received from the Office of the UK Prime Minister

Please note the address of Esther Stanford-Xosei, has been concealed. 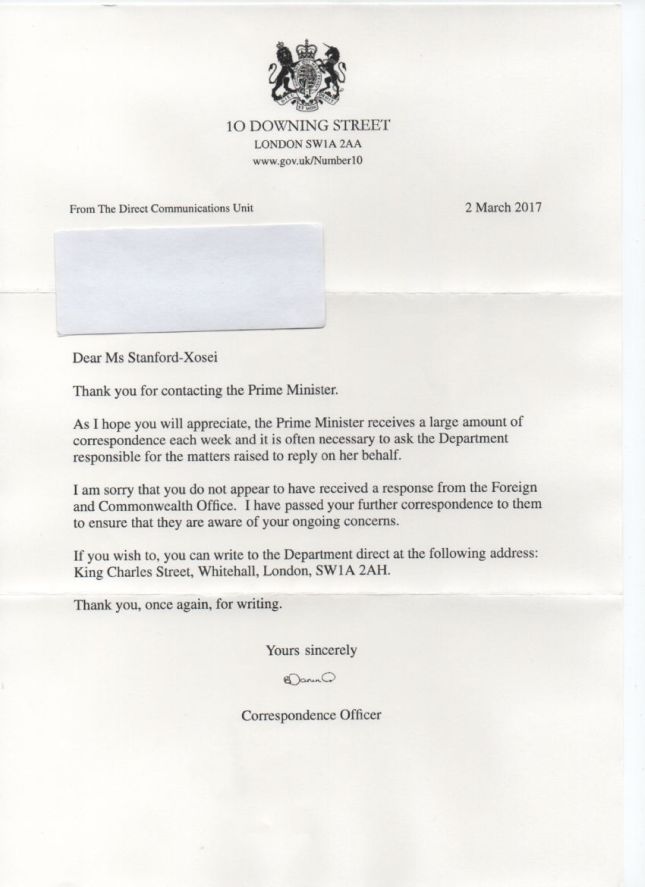 We of the Stop the Maangamizi: We Charge Genocide/Ecocide Campaign (SMWeCGEC) once again have sound reason to reiterate our concern that most officials of Her Majesty’s Government, as well as of other state organs of the United Kingdom, still rigidly hold on callously to their White Supremacy racist mentality! By this, we mean the very  pathologically sadistic mentality shaped by Global Apartheid Racism, with its virulently myopic bigotry of the Eurocentrism, with which were committed the Afrikan Holocaust Crimes of Genocide/Ecocide of the chattel, colonial and neocolonial enslavement periods that, altogether, we call by its Kiswahili name of the Maangamizi; The same depraved mentality out of which untold heinous crimes were and continue to be even nowadays conceived, masterminded and perpetrated with impunity by the British Empire in its past and present racist manifestations of Afriphobia against Afrikan people all over the World.

Another weighty revealing proof of this too often attested fact is the highly offensive remark carelessly made recently by the Whitehall official using “Empire 2.0” to describe the sort of post-Brexit trade, economic and other forms of neocolonialist and recolonising relationship that revanchist imperial Britain is planning to have with Afrikan countries belonging to her so-called Commonwealth of nations (see article in the Times Newspaper on 06/03/17 ‘Ministers aim to build ‘empire 2.0’ with African Commonwealth’ ). This appalling remark speaks volumes of a lot of what we must seriously think about, and organise to address, in terms of Pan-Afrikan Reparations for Global Justice. We are cognisant of the fact that it was made at the time that Ghana is marking the 60th anniversary of the 6th March 1957 defiantly anti-imperialist, boldly revolutionary Pan-Afrikan Internationalist and Global Justice resounding proclamation by our iconic Freedomfighting Hero, Osagyefo Kwame Nkrumah, of her independence from the British Empire!

Hence the urgency of widely circulating the accompanying letter in response to a recent missive in the correspondence trail between our SMWeCGEC and the Afrikan Emancipation Day Reparations March Committee (AEDRMC) on the one hand, and on the other hand, Teresa May, the Prime Minister of Her Majesty’s Government.

Please, do well to pass on copies of these very important documents to whomsoever else you think ought to know about them, including those in the mainstream local, national and international as well as social media.

This latest response is not something which we need be disheartened about, for powerful people do not just give up their power to deny, to dehumanise or  to oppress just because of the demands of the subjugated. We concur with the wisdom of legendary Afrikan American abolitionist and statesman, Frederick Douglas on his philosophy of reform:

“The whole history of the progress of human liberty shows that all concessions yet made to her august claims have been born of earnest struggle. The conflict has been exciting, agitating, all-absorbing, and for the time being, putting all other tumults to silence. It must do this or it does nothing. If there is no struggle there is no progress. Those who profess to favour freedom and yet deprecate agitation are men ([AND WOMEN, our emphasis]) who want crops without plowing up the ground; they want rain without thunder and lightning. They want the ocean without the awful roar of its many waters. This struggle may be a moral one, or it may be a physical one, and it may be both moral and physical, but it must be a struggle. Power concedes nothing without a demand. It never did and it never will. Find out just what any people will quietly submit to and you have found out the exact measure of injustice and wrong which will be imposed upon them, and these will continue till they are resisted with either words or blows, or with both. The limits of tyrants are prescribed by the endurance of those whom they oppress. In the light of these ideas, Negroes will be hunted at the North and held and flogged at the South so long as they submit to those devilish outrages and make no resistance, either moral or physical. Men ([AND WOMEN], our emphasis) may not get all they pay for in this world, but they must certainly pay for all they get. If we ever get free from the oppressions and wrongs heaped upon us, we must pay for their removal. We must do this by labour, by suffering, by sacrifice, and if needs be, by our lives and the lives of others.”

We repeat our sentiments in response to the Prime Minister’s first non-response (the full response can be found here):

“We reiterate our call for dialogue with the British State towards establishing the UK All–Party Parliamentary Commission of Inquiry for Truth & Reparatory Justice (APPCITARJ), as part of a parliamentary and extra-parliamentary strategy to effect some form of administrative reparations. This for us is not an end in itself, but a means to a much more global Pan-Afrikan revolutionary end. However, we do see this process as being a necessary step that must be taken to demonstrate that we have tried to peacefully engage with the British Government, Parliament and other organs of State, in accordance with their global pretensions of democracy and respect for human rights. That is the more reason why we all need to give due importance to the work being done by our colleagues outside the UK, particularly those in areas of the Continent and Diaspora of Afrika where the Maangamizi crimes of genocide and ecocide by British Government supported transnational corporations are most evident, as described by Mark Curtis in his recently published report by War on Want: ‘The New Colonialism: Britain’s Scramble for Africa’s Energy and Mineral Resources’.

The British Government will begin to take us far more seriously, and more seriously respond to our reparatory justice demands, when those of us in Britain are recognised as key players in catalysing the global Pan-Afrikan flexing of our People’s Power. This must be done in such ways and means as to start shutting down the destructive operations of British Government supported corporate criminals and their NGO quislings wrecking Maangamizi havoc upon our people, in various parts of the Continent and Diaspora of Afrika. When the continuing disrespectful attitude towards our legitimate demands by the British Government resorts to shutting things down, we must do so far and wide and beyond the UK so that our positive action from the global flexing of our people’s power demonstrates to all, the effectiveness of the global Pan-Afrikan strategy and tactics to which we remain committed, in clear distinction from all others. In this connection, we must always remember the 1968 ‘Message to the Black People of Britain’ addressed to us by Osagyefo Kwame Nkrumah. This message can be found in the book ‘Revolutionary Path’ by Osagyefo Kwame Nkrumah (pages 429-431).

You can read previous correspondence between the SMWeCGEC  and the Office of the UK Prime Minister here.

We will continue to organise and mobilise to implement the aims and objectives of the SMWeCGEC and implore you to assist us in doing so.

In Service, Sacrifice & The Intergenerational Struggle to Restore, Repair and Renew our People