Amidst the farcical storm in a teacup concerning the term “Holocaust” that is being mischieviously brewed, stirred and poured out to intoxicate the naively gullible into confusion by various sorts of questionable actors in and around the British Labour Party, Momentum and the entire Jeremy Corbyn Support Campaign, it is worth refreshing the memories of all with the contents of the following pertinent document: ‘The Holocaust Against Africa’.

The article was first published in one of the 1995 issues of the newspaper of the Socialist Campaign Group of Labour Members of Parliament (SCGLMP). The SCGLMP in 1995 had its membership then including Jeremy Corbyn, Tony Benn, Bernie Grant, Diane Abbott, Dennis Skinner, Austin Mitchel, Alan Simpson, Harry Cohen, John Austin, Alice Mahon, Tony Banks, Neil Gerrard, Maria Fyfe and Dawn Primarolo, among other prominent Left-leaning members of the British Labour Party. The current obviously stage-managed theatrical controversy around the use of the term “Holocaust”, with its colourful drama queens and their beholden subjects and court jesters, must therefore be seen for precisely what it is: a diversionary farce! The more it is seen as such and ignored with the lack of serious attention its actors are seeking, the quicker it will vanish into oblivion. Indeed, we must be careful of all sorts of elements now jumping on to the Jeremy Corbyn Support Campaign bandwagon through or outside of Momentum, only to be soliciting the mainstream media spotlight for recognition as Afrikan Heritage and/or Black Community spokespersons, without having any grassroots credibility because of lacking any well established, reputable and trustworthy track record of diligent radical work in the thick and thin of our communities of resistance in and beyond the UK.

For us in the Pan-Afrikan Liberation movement for holistic Reparatory Justice as a Black self-empowering matter of relentlessly pursuing the total emancipation, unification, self-determined progression, sovereignty and other self-repairs of the broad masses of our people throughout the continent and diaspora of Afrika, we must keep our collective and individual focus unswervingly upon striving perseveringly till definitive global victory to Stop the continuing Afrikan Holocaust of the MAANGAMIZI: We Charge Genocide/Ecocide! 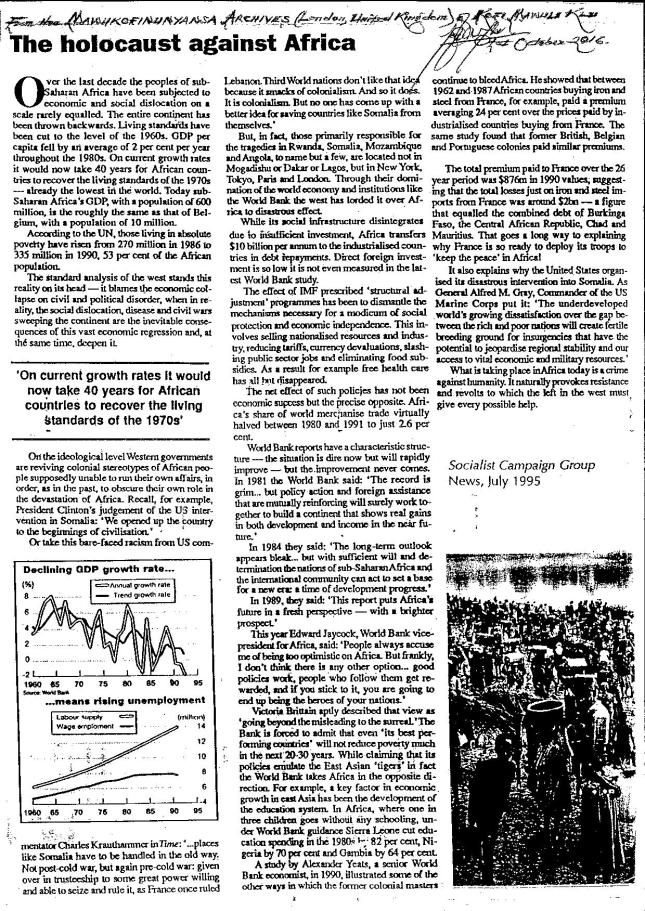